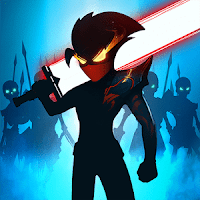 Stickman Legends - An offline and online android game Apk. This stickman fighting game is the greatest combination of Role-playing game (RPG) and Player vs Player (PvP). No more concerns about the internet, now you can enjoy it every time you have and everywhere you are with full action game experiences. Like other fighting games, you will be brought to the awesome adventure world, have to face against many zombies, monsters and mighty opponents but more than that, you have an opportunity to show off your shooting skill as in shooting games. Get ready to be the greatest player in this stickman games and master

▶ UNLIMITED ITEMS & SKILLS
There are different characters in game, and the levels, attack, defense & hp are really important in how good you will be to cope with the zombie enemies. Remember to upgrade items and skills by using golds, gems in order to increase hero’s power many times & wipe out the enemies at a glance in each war.

▶ STUNNING DESIGN, EFFECT & GRAPHICS
You will be stunned with an amazing graphic & sound effects of game. Be a stickman hero, do some crazy powerful magic and burn the darkness world. Beside that, at the end of each victory, there is a slow motion that will amaze you to the fullest!

▶ EPIC BATTLE IN STICKMAN FIGHTING GAMES
In each adventure battle, you’ll play a warrior who is on a journey of conquering the dark world. When the battle begins, the ninja warrior has to fight off the dangerous monsters that are constantly attacking him. Beat them all by using the great controls and try not to be hard hit by the monsters and their magic legion at the same time. This is an insanely hard battle all the time, so do you have the drive, courage & passion to rule this Stickman Legends world?!

▶ TONS OF DIFFERENT ACCESSORIES
Enjoy utilizing the multiple accessories in the best rpg game. Some zombies, monsters are extremely dangerous & you will need more powerful weapons than the starting ones. Combine those ones to be better and stronger to fight against them