EchoVox is a real time amplified recording system used to create a bed of random chaotic noise. ECHOVOX System uses random phonetics, microphone input and a natural loop recording echo. Delay time can be set from anywhere to 0-10 seconds. This means what you are hearing is the actual audio being recorded to disk in real time, as it happens.Echo has been shown to contribute to EVP (Electronic Voice Phenomenon)

Note: The Echo is not a digital effect added to the sound. It is a loop of the actual recording. An external/BlueTooth speaker is recommended for best results, also the louder the better.
THEORY: This is the result of years of experiments in the field, it is still a work in progress. The echo is actually a chaotic loop of the chopped up vocal samples and environmental sounds. A virtual soup of sound and frequencies impossible to predict.

ECHOVOX system has been used and tested WORLDWIDE. On live television in India and South America. Featured on televisions "Ghost Trail" and "Seekers" and more. EchoVox is simply the #1 most trusted and widely used app by both pro's and "arm chair" paranormal investigators.

Echovox is used by Barry Fitzgerald of TV's Ghost Hunters International and Bill Murphy of TV's Fact or Faked Paranormal files, Chris Flemming of Psychic Kids and Robb Demarest of Ghost Hunters International and other leaders in the paranormal field.
EchoVox is NOT just an app or it is not a toy either It is for use by serious investigators and is not for the casual user.

Hardware features
ECHOVOX requires the device to use the portrait or landscape orientation. If your app supports both orientations, then you don't need to declare either feature. 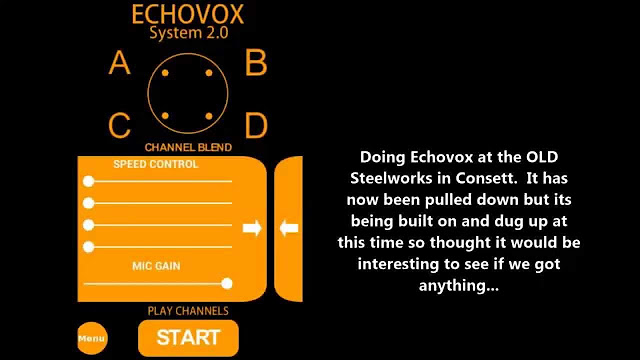